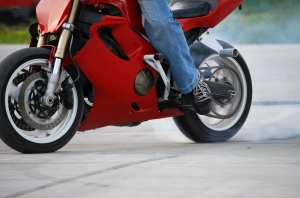 Causation is also a question of fact. Did the defendant’s breach of the duty cause the accident and subsequent injuries? Sometimes a defendant will bring what is called a “summary judgment motion.”

This kind of motion requires a plaintiff to bring forth evidence in the record (deposition transcript excerpts, discovery responses, declaration attested to under penalty of perjury) to support each of the four elements outlined above. A judge reviews the evidence to see if it’s sufficient to bring the question of fact before a jury.

In a recent case, the court considered whether there was enough evidence of causation for a motorcycle accident case to survive a summary judgment motion. The case arose when a sheriff’s deputy spotted a motorcycle speeding while on duty. The deputy followed and approached the vehicle, turning on emergency lights to alert the motorcycle to stop. The motorcycle didn’t stop.

The Estate was not able to present evidence that the deputy’s vehicle was near the motorcycle. The defendants moved for summary judgment, and this was granted on the basis of “discretionary function immunity.” This term refers to the idea that a governmental entity is immune when a government employee injures someone in the ordinary course of carrying out his or her job duties.

The plaintiff appealed the decision. The appellate court explained that there was insufficient evidence in the record for the element of “causation.” The evidence supported the conclusion that the motorcyclist’s own alcohol-related impairment caused his crash. The code dialed by the deputy without physical evidence was not sufficient to raise a question of fact. Accordingly, even though the discretionary function immunity argument that the lower court relied upon did not necessarily apply, the lower court’s ruling was affirmed.

If you have been hurt in a motorcycle or other motor vehicle accident, it is important to seek counsel as soon as possible. The experienced attorneys of Briggs & Wholey can help you file your personal injury claim. To schedule a free consultation, please contact Briggs & Wholey, LLC through our website today.